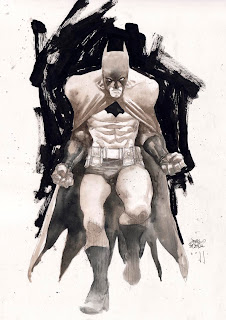 I do commissions. If you are interested please contact me.
Publicado por Sergio Bleda en 21:53 No hay comentarios: 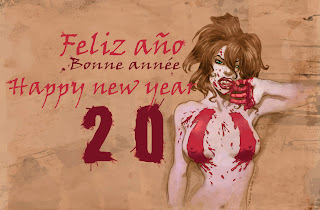 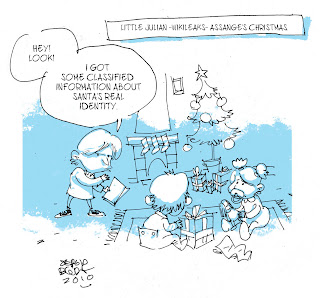 "The Works of Sergio Bleda" on Comic Book Resources 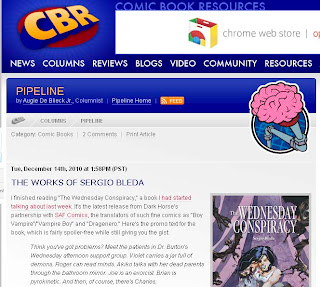 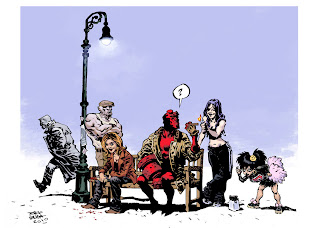 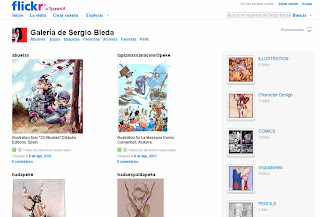 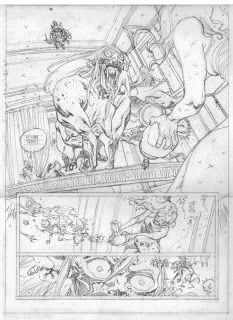 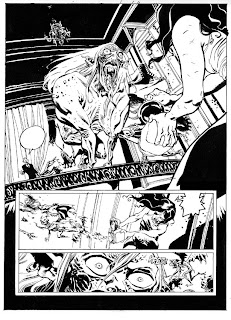 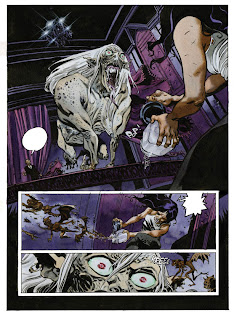 Another TV interview.
About my works for spanish cinema. 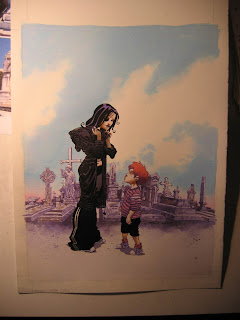 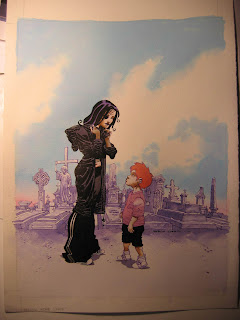 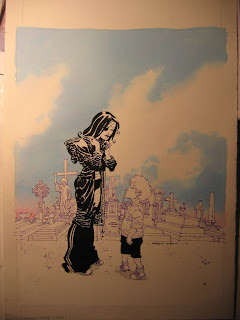 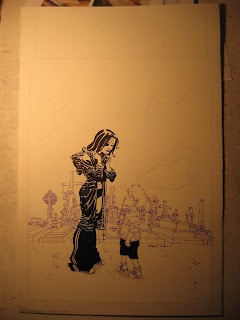 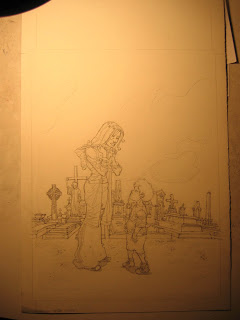 I hope you like it :)
Publicado por Sergio Bleda en 5:34 No hay comentarios:

Dark Horse to publish "Vampire Boy" and "The Wednesday Conspiracy" in 2010! 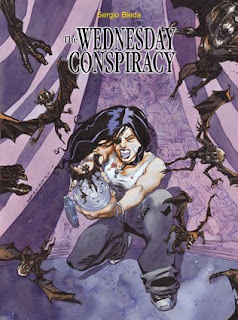 Mike Richardson, president and the owner of Dark Horse Comics and the producer of such hit movies as "The Mask," "Timecop" and "Hellboy," recently visited SAF's offices in Slovenia.
During his four-day visit, Mike and Ervin Rustemagic, the head of SAF, concluded several deals, resulting in Dark Horse publishing a number of SAF's graphic novels in the United States .
The 464-page omnibus (integral) edition of "Vampire Boy" by Trillo & Risso, as well as the omnibus edition of "The Wednesday Conspiracy" by Sergio Bleda (144 pages) have already been scheduled for publication in 2010, in addition to some other titles.

Mike and Ervin also made an agreement between their entertainment companies, Dark Horse Entertainment and SAF Entertainment respectively, to jointly develop and produce movies based on "Vampire Boy" and "The Wednesday Conspiracy." 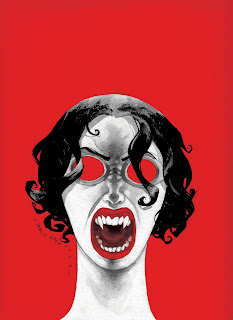 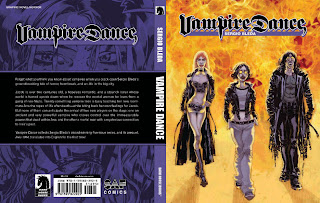 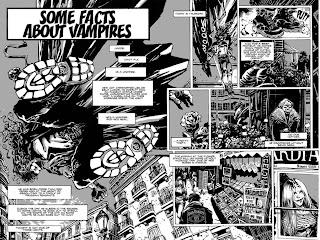 Jacob is a two-hundred-and-fifty-year-old vampire whose world is turned upside down when he's forced to intervene to save Naomi -- the mortal he loves -- from an attack by some neo-Nazis.
Agnes is a young vampire who meets Anna, a recent convert she'll have to guide along in her new immortal existence.
What none of them knows is that their destiny has been laid out in advance by the White Vampire, a master manipulator who craves control over the ancestral power living within Anna.
Story and art: Sergio Bleda
Publisher: Dark Horse (2009)
Link: http://www.darkhorse.com/Books/16-159/Vampire-Dance
Publicado por Sergio Bleda en 17:00 2 comentarios: 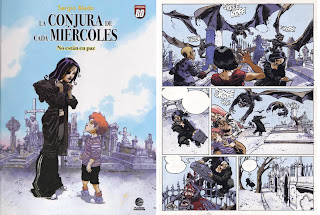 Brother Pablo sacrificed a girl to his unholy gods.
Now, in the present, the reincarnated Pablo has brought his evil back with him.
Who can resist him now that "The Wednesday Conspiracy" no longer exists and the group's leader, Dr. Richard, has died?
Story and art by Sergio Bleda.
Publisher: SAF Comics (2007)
Publicado por Sergio Bleda en 16:57 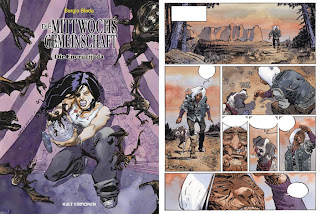 In this action-packed volume, a candidate for governor belongs to the secret society, known as Encrucijada.
When one of Dr. Richard's group of paranormals is murdered, the group discovers the truth about Encrucijada's evil purpose.
Now they are in a fight for their own existence, as well as that of the world!
Story and art by Sergio Bleda.
Publisher: SAF Comics (2006)
Publicado por Sergio Bleda en 16:54 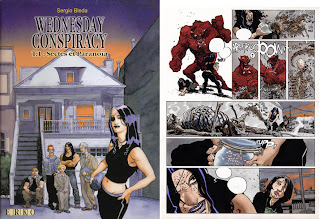 Cover (french edition) and page from "Wednesday Conspiracy" volume one.

This is an action-packed series about a group of youngsters who meet every Wednesday under Dr. Richard's supervision, who works selflessly with this group on areas of self-help.
However, no one here is fighting an addiction, but they work on controlling their paranormal abilities in an effort to learn how to live with them.
Story and art by Sergio Bleda.
Publisher: SAF Comics (2005)
Publicado por Sergio Bleda en 16:51 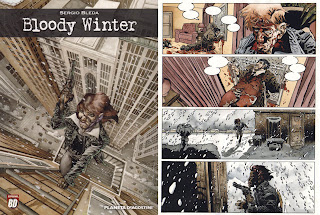 On the day of his mother's untimely funeral, Ralph, a wheelchair-bound child, is abducted. Twenty years later he returns and is now linked to Norton Gable –- a heartless, drug trafficking monster.
What's their connection?
That's what F.B.I. agent Michelle Pollock wants to know after the strangely quiet Ralph tells her where to find a serial child killer's latest victim.
As Agent Pollock gets sucked further and further into Ralph and Norton Gable's twisted world, she encounters deception, betrayal and violence the likes of which she's never known.
Dark, gritty and relentless, Sergio Bleda's “"Bloody Winter"” is frighteningly compelling as it creates a world where good doesn't always conquer evil.
Story and art by Sergio Bleda.
Publisher: SAF Comics (2004)
Publicado por Sergio Bleda en 16:48 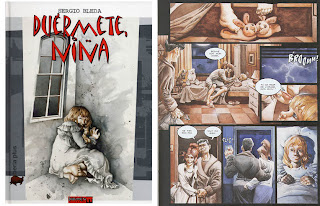 A journalist and aspiring science-fiction writer stumbles over a scoop at the local hospital - people are dying in their sleep.
Healthy young couples are discovered dead in their own beds.
Apparently, the connection is an orphaned autistic girl. Each time she's adopted by a set of foster parents, they turn up dead the next morning.
The writer learns of the strange case and decides to prepare a news article.
Unaware of the danger to anyone who comes in contact with the girl, he begins the perilous task of delving into her past.
Story and art by Sergio Bleda.
Publisher: SAF Comics (Jun 29 2003)
Publicado por Sergio Bleda en 16:44 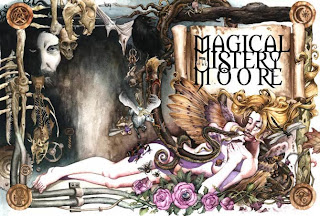 Cover art for the european version of "Magic Words". Art by Sergio Bleda
Alan Moore's Magic Words is a graphic novel containing some of comic creator Alan Moore´s songs, poems and writings turned into comics or with added art.
All the adaptations are made by writer Art Brooks.
The art was created by various European artists:Fred Torres, Ailantd, Sergio Bleda, Juan Jose Ryp, etc.
It was printed by Avatar Press in both hardback and softback in 2002. Reprints the original GN published in Europe as Magical Mystery Moore Vol. 1.
Publicado por Sergio Bleda en 16:38